The Somerset Light Infantry in Burma and Afghanistan

The Somerset Light Infantry (Prince Albert’s) was a light infantry regiment of the British Army, which served under various titles from 1685 to 1959. In the 19th century, the regiment was deployed to many different parts of Asia and Africa to protect British interests.

On this page, you will find information about the regiment’s participation in the Anglo-Burmese War of 1824 – 1826 and the First Anglo-Afghan War. 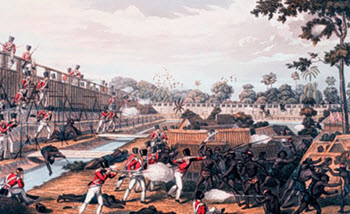 The following year, the 13th (1st Somersetshire) Regiment (Light Infantry) left for India and arrived in Calcutta (Kolkata) in May and June 1823. In March 1824, war with Burma was formally declared, after Burmese forces attacked Cachar, a territory under British protection. The 13th Light Infantry participated in the campaign, until a peace treaty was signed in early 1826. After the Anglo-Burmese War, the 13th Light Infantry went back to India were they would remain until 1838. During this period, they were station in Baharampur , Danapur, Agra and Karnal. 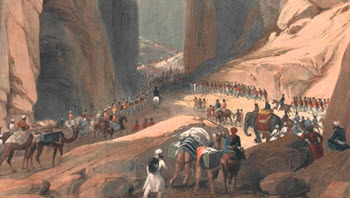 In November 1838, the 13th Light Infantry joined the newly formed Army of the Indus and reached Afghanistan in March 1839, taking Kandahar in April. The reason behind the British invasion was a fear of Russian intervention in the region. In 1837 Persian troops were occupying Afghanistan’s Herat area, and they were strongly allied with Russia. As a response, the British decided to remove the emir of Afghanistan – a man named Dost Muhammad – and replace him with Shuja Shah Durrani, who they hoped would protect British interests over Russian. To this aim, the Army of the Indus was assembled and sent into Afghanistan.

In October 1841, Shuja was overthrown in a popular uprising that managed to take Kabul, the capital of Afghanistan. The 13th Light Infantry initially fought the uprising, but was forced to retreat to the town of Jellalabad (Jalalabad) in November.

Jellalabad, which was a fortified city, was soon besieged by anti-British Afghan forces. It would take until April 1842 before the British garrison, led by Sir Robert Sale of the 13th Light Infantry, managed to break the siege and defeat Akbar Khan’s men. 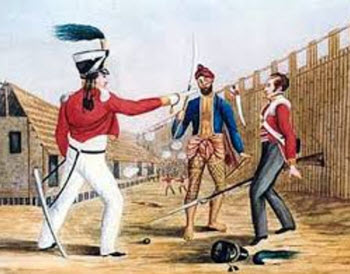 After the end of the Anglo-Afghan War in 1842, the 13th (1st Somersetshire) (Prince Albert’s Light Infantry) Regiment of Foot remained in India until 1845 when they returned to England. The regiment had first arrived in India in 1823 and thus spent well over two decades in foreign service. Back home in Britain, they were presented with new colours at Portsmouth in 1846, before being sent to Ireland in 1847. In 1850 they left Ireland for a year in Scotland, before making the journey south to Gibraltar were the regiment remained until 1854.