The Battle of Langport was fought near the small town of Langport, not far from Yeovil in Somerset, on 10 July 1645. It was one of the battles of the First English Civil War.

The Battle of Langport was important, since the Royalist defeat gave the Parliamentarians control over the West of England, an area that up until then had been an important source of raw materials, imported goods and manpower for the Royalists.

Short facts about the Battle of Langport

During the First English Civil War, the town of Taunton in Somerset was of strategic importance since it controlled the main road from Bristol to Devon and Cornwall. Therefore, it was besieged three times by Royalist forces from September 1644 to July 1645.

The first siege was laid by Edmund Wyndham’s forces on 23 September 1644. The forces chiefly consisted of Royalist troops from local Somerset garrisons. On 14 December, Taunton was relieved by a Parliamentarian force under James Holborne.

In late March 1645, the Royalists commenced a second siege of Taunton, culminating in a series of fierce attacks in May. After five days of intense violence, a Parliamentarian relief army arrived and the Royalists retreated.

In mid-May, Lord Goring engaged the departing Parliamentarian relief army and forced it back into Taunton. The Royalists then renewed their blockade of the town, but in a lax way that allowed provisions to enter the town.

The third siege of Taunton 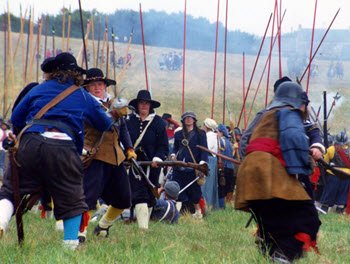 As mentioned above, the third siege of Taunton started in mid-May 1645.

On 14 June, the main body of the Parliamentarian New Model Army won the important Battle of Naseby against King Charles’ main army. The Royalist garrison of Leicester surrendered four days later and this made it possible for the New Model Army – under Sir Thomas Fairfax and with Oliver Cromwell himself as Lieutenant General of Horse – to devote their attention to Taunton.

The Battle of Langport took place on 10 July, 1645. It didn’t take place in Taunton, because the Royalist forces were in the process of withdrawing. Lord Goring was weary of Parliamentarian attacks, and ordered a strong rearguard to cover the slow-moving artillery and baggage. Goring’s men were outnumbered by Fairfax’s approaching men, and the Royalist force also suffered from poor discipline. A succession of lax Royalist commanders had allowed discipline to fall, and they had also alienated the local inhabitants by allowing the Royalist force to pillage in a fashion considered exorbitant even by the standards of the time.

Lord Goring’s main force held a ridge running north to south, roughly one mile east of Langport. The stream Wagg Rhyne was running in front of the ridge, creating a marshy valley environment. Crossing the stream was possible thanks to a ford. Goring positioned two light guns to protect the ford and the connecting tree-lined lane, and placed colonel Wise’s and colonel Slaughter’s raw regiments of Welsh foot soldiers in the hedges. At the top of the ridge, Sir Arthur Slingsby’s regiment was waiting, together with Goring’s own regiment and Goring’s personal life guard.

Goring was hoping that Fairfax would decide on time-consuming outflanking moves, but Fairfax had another strategy in mind. He knew that his cavalry was extraordinarily well disciplined and planned to use it to reach Goring.

Fairfax employed his artillery to take care of Goring’s two light guns and sent Colonel Thomas Rainsborough with 1,500 musketeers through the marshland to clear the Royalist infantry from the hedges.

The next step was to have two divisions (half regiments) of horse charge up the lane to the top of the ridge. These two divisions came from Whalley’s and Farifax’s regiments, and had earlier been included in Cromwell’s double regiment of ironsides.

At this point, Parliamentarian reinforcements was coming up the lane towards the top of the ridge, and seeing this made the Royalist force flee. Instead of just chasing after them in an undisciplined fashion, the Parliamentarian cavalry halted at the top of the ridge and waited for the forces to reform. They then got the order to rapidly pursuit the fleeing Royalists.

As Cromwell’s troopers approached, Goring’s army dissolved, leaving not just their baggage behind but also most of their weapons. 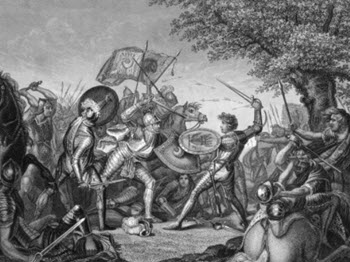 Due to previous pillaging by soldiers, local residents in the Langport region had banded together and armed themselves with cudgels and similar to protect their families and possessions. Now, many of the fleeing Royalists were attacked by these clubmen. (The following day, Fairfax met with representatives from the local clubmen and promised to pay for all supplies needed by the Parliamentarian forces, and leave the locals alone as long as they didn’t help the Royalists.)

Lord Goring took his cavalry with him to Barnstaple in Devon, leaving only an infantry garrison in Bridgewater, West Somerset. Reportedly, he was depressed by the defeat, and according to some sources he was drinking heavily. Losing the Battle of Langport was a major setback not just for Goring personally but for the overall Royalist morale in the war.

Fairfax’s forces moved on to Sherborne in Dorset, and Sir Lewis Dyve surrendered Sherborn on 17 August. On 10 December, Parliamentarian forces successfully stormed the city of Bristol, which up until then was the major manufacturing centre for the Royalists.

The Royalists that now remained in West Country was isolated from the Royalist forces positioned in Wales, Oxford and Midlands.

The following year, 1646, became the final year of the First English Civil War.