Ham Hill Hillfort is an Iron Age hillfort in Somerset. The hill rises to 120 meters above sea level near the Parrett and Yeo river valleys. Covering a total area of 210 acres, it is one of the largest hillforts in the whole country.

Nowadays, the whole hill is a country park operated by the South Somerset Council and it receives roughly 250,000 visitors each year. It is the only British hillfort with an interior public house.

The protective barriers (ramparts) enclose an area of 85 ha. Some of the banks are up to 12 meters high. Most of the perimeter is a double bank and ditch (multivallate).

The southern part consists of a rectangle that runs roughly 800 meters by 1,000 meter. There is also a northern spur, approximately 600 meters by 400 meters, that gives the barrier structure the form of an irregular L.

The major entrance is found to the south-east, in line with the road that is there today. Another entrance is located to the north-east, connecting to a track that runs from the Church of St Mary the Virgin at East Stoke in Stoke-sub-Hamdon.

The hillfort, especially the northern and western parts, have been damaged by extensive quarrying for hamstone. In the 19th century, two dozens of small quarries were working the hill, employing roughly 200 men. Today, two quarries still exist, owned by the Duchy of Cornwall. In the year 2000, a stone circle comprised of 15 hamstones were created on the site to commemorate all those who have quarried stone here throughout the centuries.

The Ham Hill Hillfort is an Iron Age hillfort. The Iron Age of the British Isles covers the period from about 800 BC to the Roman invasion of 43 AD. Archaeologists have found numerous Iron Age artefacts at the Ham Hill Hillfort, including iron currency bars, silver coins, gold coins and bronze-work. Burials and cremations have taken place here during the Iron Age, and chariots have probably been used since chariot parts have been found.

From the first century BC, the Durotriges tribe lived here.

The site was important during Roman occupation, and findings indicate that a Roman villa was built on the hillfort. One theory suggests that a Roman fort was created here during this period to help control the Fosse Way.

In the 19th century, a crock containing Roman coins were found at the site, dating from Domitian to Constantine the Great. Domitian was the Emperor of Rome from 81 to 96 AD, while Constantine reigned from 306 to 337 AD. Another interesting find is a vessel filled with 338 sestertii (a type of ancient Roman coins). The vessel and its coins were handed over to the Museum of Somerset by W.R. Phelps in 1915. Two other vessels, both buried after the year 260 AD, have also been found at the site. Together, they held over 1,000 coins, dating from Republican Rome to the reign of Postumus. Postumus was a Roman commander who around the year 260 AD assumed the title and powers of emperor in the provinces of Britannia, Germania, Gaul and Hispania, once the Roman army in Gaul had threw off its allegiance to emperor Gallienus.

Another example of remains from the Roman era that’s been unveiled on this site are bronze scales belonging to a lorica squamata, a type of scaled armour.

In England, the medieval period runs from the end of the 5th century to the start of the early modern period in 1485. This is when England emerged from the collapse of the Roman Empire. During the early medieval period, Germanic immigrants began to arrive in increasing numbers and new political and social identities emerged, including an Anglian culture in the east of England and a Saxon culture in the south. At the Ham Hill Hillfort, the number of archaeological findings from the Saxon period is very low compared to the Roman period, and we do not know much about how the Ham Hill Hillfort was utilized by the Saxons.

We do know that the Ham Hill Hillfort region was inhabited during the Middle Ages, and the hamlet of South Ameldon was flourishing enough to hold an annual fair and court from the year 1102 and throughout the rest of the Middle Ages and well into the Early Modern Period. We also know that during the 14th century, part of the hillfort was used as a rabbit warren.

What is a hillfort? 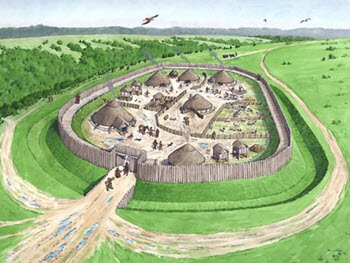 In Europe, many hillforts were created during the late Bronze Age and early Iron Age. They were earthworks used as a fortified refuge or defended settlement. To make them easier to defend, hillforts were created on hills, where the natural rise in elevation gave the inhabitants and advantage against attackers.

The fortification typically follows the contours of a hill and is formed by one or more lines of earthworks and external ditches. When they were still in use, it was not unusual for stockades to be employed.

Hillforts were in use in many Celtic areas of central and western Europe until the Roman occupation, and some continued to be used even during and after the Roman era.

The creation of Hillforts seems to have commenced roughly at the start of the first millennium BC and we still don’t know exactly which occurrences or developments that prompted their creation. In Britain, it has been argued that the British hillforts may have been created to fend off invading groups from continental Europe, or maybe created by invaders from central Europe that needed to defend their conquered lands. Population increase has also been cited as a contributing factor in the creation of hillforts.

Since the 1960s, the dominating view among historians and archaeologists is that the hillforts were created to handle social tension within Britain, as the increased use of iron as the Bronze Age gave way to the Iron Age is believed to have prompted social changes. Trading patterns probably shifted when iron became a more sought after metal than the tin and copper used to make bronze. Areas with tin and copper ores became less affluent, while groups who controlled iron ores flourished. Thus, an old elite lost their power.