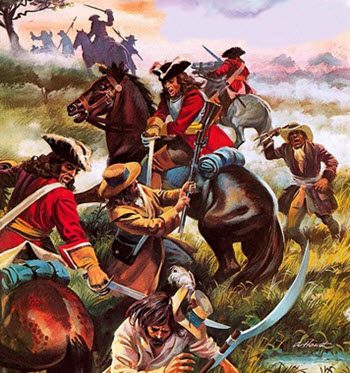 When king Charles II died in 1685, his younger brother was crowned James II – despite being a Roman Catholic. Protestants who opposed a catholic king put forward James Scott, 1st Duke of Monmouth, as the rightful heir to the throne, despite the fact that he was an illegitimate son of Charles II. Their attempt to overthrow James II and install a protestant on the throne is known as the Monmouth Rebellion, The Revolt of the West and The West Country Rebellion.

As a response to the Monmouth Rebellion, James II expanded the size of his army – including the creation of nine regiments of foot. On 2 June 1685, Theophilus Hastings, 7th Earl of Huntingdon was issued a royal warrant authorising the earl to raise a regiment. The earl chiefly recruited men from the county of Buckinghamshire and created Earl of Huntingdon’s Regiment of Foot. This was the regiment that would eventually become the Somerset Light Infantry. 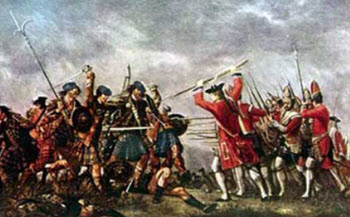 The Jacobites wished to return the catholic James II to the throne of Great Britain, and this resulted in the Jacobite Wars. In 1689, Hasting’s Regiment of Foot was employed to combat Jacobite forces in Scotland. At the Battle of Killiencrankie, the Highland charge of the Jacobites took the government forces by surprise and overwhelmed them in 10 minutes, but one of the most famous leaders of the Jacobite uprising – John Graham of Claverhouse – was killed.

The government forces failed to halt the advance of the Jacobite forces at Killiencrankie, but the Jacobites were later defeated at the Battle of Dunkeld.

In the following year, Hasting’s Regiment of Foot was sent to Ireland to fight at Boyne and Cork.

The Nine Year’s War (1688-1697) was a major conflict between Louis XIV of France and a European-wide coalition of Austria and the Holy Roman Empire, the Dutch Republic, Spain, Britain, and Savoy.

In 1692, Hasting’s Regiment of Foot set sail for Flanders, and in 1694 they participated in an amphibious assault at Camaret on the French coast. The assault was a disaster for the British.

In 1695, Fernando Hastings was found guilty of extortion and Sir John Jacob took over as colonel for the regiment. The regiment was now Jacob’s Regiment of Foot, and was to remain abroad until 1697 when the Nine Year’s War ended.

War of the Spanish Succession 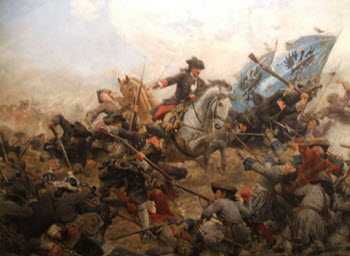 After the end of the Nine Year’s War, Jacob’s Regiment of Foot did garrison duty in Ireland before going back to Flanders in 1701. In 1702, their colonel retired and sold the colonelcy to his brother-in-law, Lieutenant-General James Barry, 4th Earl of Barrymore. The payment was 1,400 guineas.

As the War of the Spanish Succession broke out in 1702, Earl of Barrymore’s Regiment of Foot participated in battles and sieges at Kaiserwerth, Venlo, Roermond, Huy, Limburg and Liège. In 1704, they travelled to the Iberian Peninsula to defend Gibraltar, and in the following year, the regiment aided in the Siege of Barcelona.

In 1706, the British forces were experiencing a shortage of cavalry and a majority of the men in Earl of Barrymore’s Regiment was turned into a regiment of dragoon. Only a small cadre remained with Barrymore, and returned with him to England to find new recruits before going back to Spain. In Spain, they fought four battles in five years. 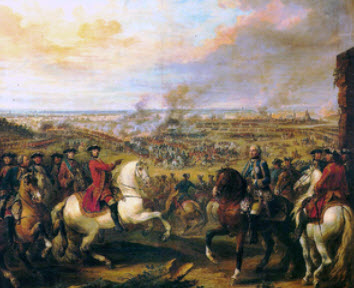 War of the Austrian Succession

In the same year as the Battle of Fontenoy, Pulteney’s Regiment of Foot went back to Britain. The government needed them in Scotland, were Jacobites were rising. In January 1746, government forces – including Pulteney’s Regiment – were defeated at the Battle of Falkirk. But the Jacobite joy was short lived; just three months later they were defeated for good in Culloden, with Pulteney’s soldiers participating in the battle.

Once the Jacobite rising was squashed, Pulteney and his men went back to Flanders again. They participated in two unsuccessful battles against the French, one in Rocoux in 1746 and one in Lauffeld or Val in 1747. The regiment returned back to England in 1747 and in the following year the War of the Austrian Succession ended.