Colonels of Earl of Huntingdon’s Regiment of Foot

Colonels of the 13th Regiment of Foot

Colonels of the The 13th (1st Somersetshire) Regiment of Foot

Colonels of the The Somerset Light Infantry (Prince Albert’s)

When the regiment was formed in 1685, they were given red coats with a yellow coat lining. The yellow lining was visible at the turned back cuffs, skirts and lapels.

Later, when the style of the uniform was changed, and yellow was used for the collar and cuffs of the jacket or tunic.

The facing colours of the “Marching Regiments on Foot” was regulated by royal warrant in 1751 and the 13th Foot (Lieutenant-General Pulteney’s Regiment) was assigned the colour “philemot yellow” as their facing colour. The word philemot is a corruption of the French feuille morte which means dead leaf. So, the facing colour of the 13th Foot was the yellow of an autumn leaf.

In 1842, the 13th Foot became a royal regiment and given the title “Prince Albert’s”. As a part of this change, their facings were changed from yellow to dark blue.

The regiment was granted light infantry distinctions in 1822. As late as the full dress of 1914, we can see this surviving in the form of a bugle-horn in the badge and the dark green home service helmet worn instead of the dark blue ones used by the line infantry.

The forage cap and postwar No.1 dress uniform worn by the Somerset Light Infantry were also dark green.

In 1830, the braid and lace worn by officer’s coats in the 13th Foot was changed from silver to gold.

In 1898, officers of all regiments were ordered to wear the sash knotted on the left side, with the exception of the 13th Regiment of Foot who were permitted to continue with the knot on the right. 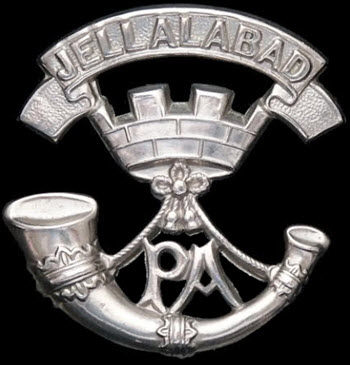 It would take quite a long time before this regiment began using the name Somerset Light Infantry. Until the late 17th century, the regiment was simply known by the name of its current colonel. It thus went from being Earl Huntingdon’s Regiment of Foot to becoming Hasting’s Regiment of Foot, and so on, throughout the 1600s. By 1742, it was fighting in the War of Austrian Succession under General Harry Pulteney and was thus known there as Pulteney’s Regiment of Foot.

This naming practice was changed in 1751, when a royal warrant was issued, stipulating that regiments should be known by their individual number. As early as the late 1600s, each regiment of the standing British army had bee given an individual number that showed their “rank” in the order of precedence. From 1751, Pulteney’s Regiment of Foot was formally know as the 13th Regiment of Foot.

The 13th Regiment of Foot enjoyed a 30 year long period of garrison service in England, Ireland, Gibraltar and Minorca. When the American Revolutionary War broke out, the regiment was sent to Barbados but saw little active service before returning to England in 1782.

In August 1782, all English regiments on foot received an English county designation, unless they were royal regiments or highland regiments. The intention was to make it easier to recruit soldiers to the regiments.

The very great deficiency of men in the regiments of infantry being so very detrimental to the public service, the king has thought proper to give the names of the different counties to the old corps, in hopes that, by the zeal and activity of the principal nobility and gentry in the several counties, some considerable assistance may be given towards recruiting these regiments”.

– Secretary of War, Thomas Townshend in a letter issued to the lieutenants of each English county

The name change didn’t impact recruitment much. Just as before, the regiments found it easier to recruit in major population centres rather than focus on a specific county.

In 2007, The Light Infantry was amalgamated with the Devonshire and Dorset Regiment, the Royal Gloucestershire, Berkshire and Wiltshire Regiment, and the Royal Green Jackets to form The Rifles.